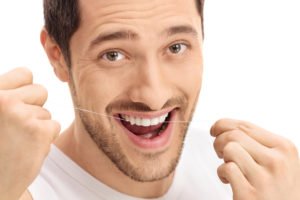 You may remember a report last year that identified the fact that flossing had been dropped from federal dental guidelines. A mass hysteria ensued on social media, as people rejoiced that they didn’t have to floss anymore. Unfortunately, the cause of celebration should be short-lived.

I Don’t Have To Floss Anymore, Right?

Bacterial plaque is an important cause of gum inflammation. If left untreated, it can eventually lead to bone loss and gum disease known as periodontitis. Flossing is necessary to remove plaque. Brushing is inadequate, as toothbrushes are ineffective reaching the areas between the teeth. Even after brushing, a small film of plaque can easily be left behind. Flossing disrupts the construction and buildup of plaque, resulting in a healthier, cleaner mouth with less inflammation and a decreased risk for gum disease.

But It Was Dropped From Federal Guidelines!

Even though the federal government removed flossing from its list of recommendations, there was nothing that advised individuals to stop flossing. Meaning, if there is little evidence that supports flossing as beneficial, there is zero evidence which states it as harmful. Flossing reduces the risk of gingivitis. Even if it is reduced minimally, it is reduced enough that it is worth the effort.

One of the problems with flossing research is that studies are conducted on a short-term basis, typically ranging three to six months. The addition of flossing to a regular brushing regiment lowers the risk of gum inflammation. This may seem like a minimal gain for a lot of trouble. However, short-term studies don’t indicate bone loss from gum infection and cavities, as they typically take longer to develop.

It is our recommendation that you continue flossing. Although it may seem like a mundane and worthless task, it is something that can have a long-term impact on your oral health. Not doing so will allow bacteria and plaque to build. Taking a few minutes every day to floss will improve your oral health and prevent long-term complications.

Could A Magnetic Device Solve Sleep Apnea? The Terrible Effects Of Grinding Your Teeth
Scroll to top