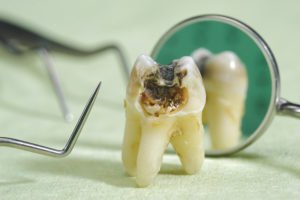 Cavities are the most common problem out there when it comes to teeth. Our mouths are full of a bacteria that dissolves enamel and dentin, the two materials that make up the outside of our teeth, and even if you care for your teeth properly there’s a good chance that you’ll get several cavities before you’re 18 years old.

Cavities and fillings are things everyone has to live with, but no one really likes going to the dentist to get the cavity drilled and the filling put in place. Unlike teeth whitening and many other cosmetic procedures, it’s not something that can be done but something that needs to be done. And it’s something that needs doing more than once since cavities can form next to or underneath a filling as the bacteria in your mouth pick up where they left off. But what if the filling didn’t just take up space and actively helped your teeth regenerate?

Recently, British researchers in Belfast added the active ingredient in aspirin to a composite cavity filling, and they discovered something incredible. While the outer layer of enamel on every tooth is just a mineral, the thick layer of dentin between the enamel and the pulp is partly a mineral and partly organic. Once enamel is gone it doesn’t grow back, but the living cells of the pulp are slowly but constantly regenerating the dentin. And what those Belfast researchers discovered was that aspirin encourages these cells to regrow dentin much faster.

The only other thing we’ve seen that can help teeth regrow is fluoride, and that works much differently. Fluoride works like a kind of catalyst that causes enamel dissolved by bacteria to remineralize and repair the damage. It doesn’t do anything for dentin, so once a cavity reaches that layer it doesn’t go away. Aspirin fillings can help that layer regrow, and so while it doesn’t prevent cavities it can help your natural teeth stick around for as long as possible.

By using aspirin in tooth fillings, the fillings could play an active role in repairing teeth on top of their regular job of protecting teeth from further damage. And since aspirin is a low-cost, over-the-counter drug, it likely won’t be long before fillings that include aspirin make their way to a dentist’s office near you. After all, while fillings might be a fact of life, it’s always good to have them be as few and as small as possible.

How Important Is Mouthwash? 2 New Techs That Are Changing Dentistry
Scroll to top