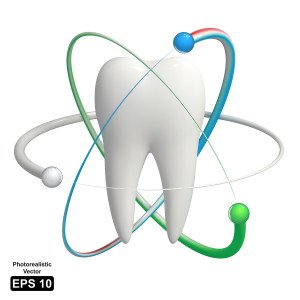 In the early 20th century, the dentist Frederick McKay began looking into a phenomenon which was known at the time as the Colorado brown stain. The stain was characterized by brown discolorations and noticeable pits which appeared on the teeth of people who lived in certain parts of Colorado. While it wasn’t a pretty sight, McKay also happened to notice that those who suffered from the brown stain also suffered from fewer cavities than the national average.

Although it took him several decades, McKay eventually discovered that the culprit was an excess of fluoride in the water. The mountain streams which supplied the affected communities ran across several fluoride-rich deposits, and so the element tended to wear into the water.

McKay didn’t stop there, however. Although the side effects were unfortunate, he was intrigued by fluoride’s cavity-prevention qualities, and after several more years of study he discovered that you could get all of the benefits and almost no drawbacks by adding a very small amount of fluoride to the water supply. The average cavity rate dropped significantly in communities which decided to do so, and the worst side effect people encountered was the occasional white stain in children’s teeth.

The means by which fluoride prevents tooth decay is actually fairly simple. Certain kinds of bacteria live in your mouth, and they break down tooth enamel when they feed on simple carbohydrates like sugar. This involves removing fluoride from the enamel molecules, and so by adding extra fluoride ions to the bacteria’s byproducts, you can turn them back into enamel and reduce the rate at which cavities grow.

Fluoride as cavity prevention doesn’t end with tap water, however, and even today in many parts of the United States it doesn’t begin there, either. You can also use fluoridated toothpaste to strengthen your teeth each time you brush, and if you visit your dentist regularly, they’ll usually give you a fluoride gel which can provide some additional protection.

Ever since Frederick McKay discovered the effects of fluoride on tooth decay, the global cavity rate has decreased by 50 percent or more. Whether we apply the fluoride through the water supply, through our toothpaste, or simply through visits to the dentist, element number 9 has proven its effectiveness in keeping our teeth safe.

Cavities: Why Do My Teeth Hurt? Braces Aren’t Just About A Pretty Smile
Scroll to top