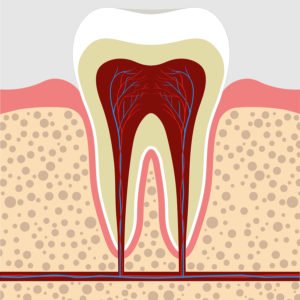 Human teeth consist of three layers. The outer layer is enamel, a white, translucent material that happens to be the hardest substance in the human body. The middle layer is dentin, which is about half mineral and half organic and shares a lot in common with your bones. The innermost layer is the pulp, which is made up of living cells and supports the living parts of dentin.

Because the dentin layer is partly alive, it slowly grows over time. But most of that growth goes inwards, replacing the pulp, and when a cavity eats through the enamel layer and damages the dentin, the dentin will only regrow a thin layer at best after a dentist drills and fills the cavity. This is because if dentin kept growing outward, it would force the enamel crown to crack and fall off.

But that could change soon thanks to a drug that’s in testing right now called Tideglusib. Researchers developed the drug to fight Alzheimer’s disease, but they recently discovered that when you apply it topically to dentin it can tell that dentin to start growing like it was a new tooth again. Since the drug was already in human trials for Alzheimer’s, it could come to a dentist near you relatively soon.

Still, despite the good news, it’s worth saying that this drug won’t replace fillings completely. Even if the dentin grows back, the enamel won’t, and so you’ll still need a filling to protect the dentin from damage and infection. But because this drug can make the dentin grow back, it means that a cavity will never be able to reach the pulp layer so long as you visit the dentist regularly and treat cavities as soon as they appear. And that means you may never have to worry about getting a root canal or losing a tooth to decay.

Tideglusib isn’t a cure-all, it won’t replace regular visits to the dentist, and it might not even get FDA approval because of a side effect we don’t know about yet, but if it does make it to the dentist’s office it could make a big difference. There’s still no way to stop enamel from weakening over time, but keeping the dentin underneath from disappearing will make it much easier for people to keep their natural teeth for as long as possible, even if that means replacing the enamel with an artificial crown.