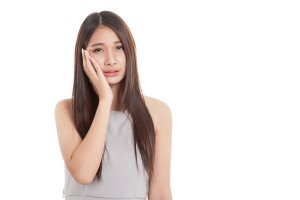 Unlike just about every other part of your body, including the bones, the outer layer of every one of your teeth is dead. Enamel is almost 100 percent mineral, which means it’s more like a seashell than a bone. It also means that when you get a toothache, it’s not the enamel that’s hurting. So why are teeth designed to hurt at all?

To put it simply, teeth hurt because the somewhat alive dentin and completely alive pulp hidden beneath the enamel are both very sensitive to any sort of temperature change or physical touch. It’s built this way to warn you when you get a cavity deep enough that it’s eaten through the enamel. It’s good to have an early warning about this sort of thing because it lets you know first that your teeth are weakening and second that a colony of bacteria is close to reaching your bloodstream and causing a potentially deadly infection.

Then again, a sensitive tooth may simply be transmitting pain which you’re actually feeling in your gums. Your gums aren’t subject to cavities, but they are subject to everything else, including inflammations, infections, and injuries inflicted by unusually sharp food.

In addition, there are other reasons for sensitive teeth beyond cavities. Some individuals are simply unfortunate enough to be born with either thin enamel or a thick, sensitive dentin layer which makes their teeth more sensitive than other people’s. Still, if the pain level spikes from “normal” to “much more than normal,” it’s time to see a dentist right away.

If you are dealing with tooth sensitivity which can’t be solved with a filling or a root canal, then your best bet is to do what you can to slow the inevitable decay of your tooth enamel. Fluoride helps fight demineralization better than anything else, which means you should drink fluoridated water, brush your teeth (gently) with fluoridated toothpaste, and visit the doctor regularly for fluoride treatments.

When Is It Time To Extract A Tooth? Sealant: The Proactive Filling
Scroll to top