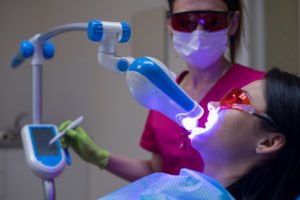 Lasers have been around for decades. They can concentrate a lot of light and heat radiation onto a single point, and both scientists and doctors are still finding new ways to use lasers to help industries and solve problems. Laser surgery can improve your eyesight, and lasers can remove tattoos and birthmarks. The heat and precision of a laser can also come in handy for several dental procedures, including the ones on this list.

The infected part of a tooth is weaker than the enamel around it, and it’s full of harmful bacteria. So if you calibrate a laser just right, you can destroy the bacteria and weaken the cavity without damaging the tooth enamel. It might not be a complete replacement for a drill, but it can make the drilling faster and less painful.

In some mouths, the gums go too far up and cover part of the tooth’s crown. This can be a problem because it makes gum infections like gingivitis and periodontitis more likely, plus it can hurt to chew certain foods. Your gums will also swell up when they become infected, and they can make it harder for your adult teeth to erupt. So while you can’t get a laser to destroy bacteria and not touch your gums, a laser can come in handy when you need to reshape or remove gum tissue and you need to be precise.

Lesions are lumps of damaged tissue, and depending on what caused them they can make it hard to chew or swallow food. A laser can be precise enough to burn away a lesion and leave only the healthy tissue behind, and they can reduce the pain of canker sores. They can also take biopsy samples so a dentist can find out whether a lesion is a symptom of cancer.

At many dental offices, a teeth whitening treatment includes a laser. The heat of the laser can help the whitening chemicals work faster, or at least that’s the theory behind the practice.

Because lasers are so new to dentistry, there aren’t many studies yet that prove how effective they are. So while the FDA has approved lasers for use in dental procedures, the American Dental Association hasn’t put its seal of approval on any laser treatments. But as the technology spreads, so does the number of successful cases, and so you shouldn’t be surprised if you see a laser in your dentist’s office the next time you stop by for a checkup.